In a small ceremony, the local community said goodbye on June 20th. three members of the “pensioner band”. This has been responsible for the care of the benches in the Lieser district for twenty years, a time-consuming task with 126 benches and tables. The group has also been doing other lighter work since it was founded. After 20 years, Alois Michels, Paul Knop and Peter Meurer, three of the founding members, said goodbye to active work. An understandable step when you consider that all three have already reached the age of 85 or are about to. They have all rendered outstanding service to the group and to the community. Alois Michels was the head of the group from the day it was founded until today, coordinating all measures and taking care of the procurement of materials and implementation. All three were also characterized by their striving for an intact community within the group.
Mayor Kiesgen thanked them warmly on behalf of the municipal administration and emphasized that the group was a stroke of luck for the municipality. In addition to being an example of voluntary commitment, she is a significant support for the community workers, who are relieved of this time-consuming work and are available for other work. He presented various gifts of thanks to those who had left, as well as the state’s honorary office certificate, which was signed by Prime Minister Dreyer.
With his words of thanks, he linked the hope that the group would continue to work with the usual commitment in the new/old line-up. With Erwin Schröder, a longstanding member has agreed to take over the leadership role from Alois Michels. With Herbert Mehn, Hermann Offer and Klaus Heil, he has three experienced “old guys” at his disposal. Newcomers to the group are Wilfried Grett and Wolfgang Schmitz. The mayor also thanked you on behalf of the local community. 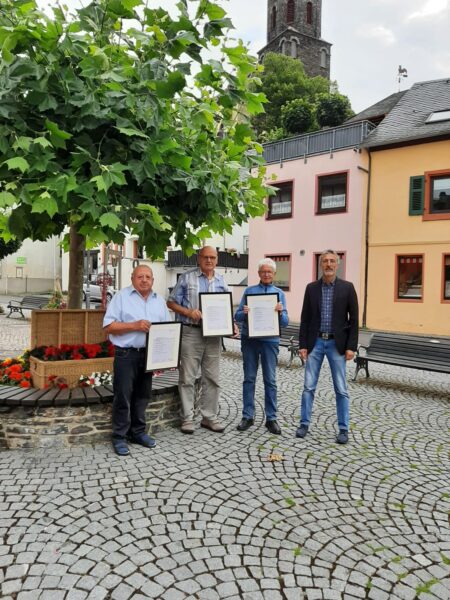 On the photo from left to right: Peter Meurer, Alois Michels, Paul Knop, mayor of Kiesgen

Carneval for the kids